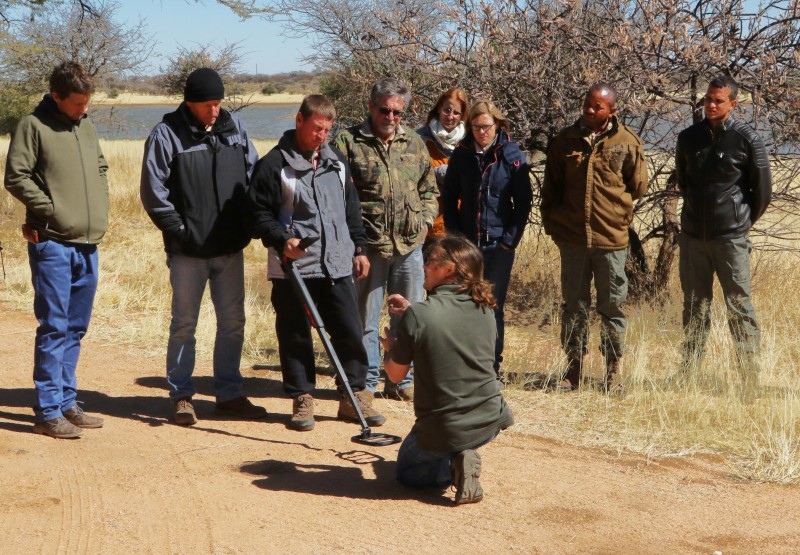 (How to use a metal detector was explained and demonstrated to the participants of the Animal Crime Scene and Evidence Handling Course sponsored by ISAP. When trying to find a piece of “evidence” (metal) hidden in the ground course participants realized that it takes some practise to be able to use the device. Photo: ISAP / Dirk Heinrich)

What should a farmer, lodge manager, landowner or a farm worker do when he stumbles across a poaching scene?

Participants of the Animal Crime Scene and Evidence Handling Course received detailed answers to the question and at the same time got insight information into the complexity of gathering evidence. During the course, participants were reminded that they are neither police officers nor experts in collecting evidence. The main aim should be to be a partner of the police and to assist them by properly securing a crime scene and valuable evidence.

The course which took place from 16 to 19 July 2020 was sponsored by ISAP and was presented by Wildlife Vets Namibia at the ISAP facility. Participants were veterinarians, lodge managers, wildlife farmers, members of crime prevention forums, owners of hunting farms, students and people from the tourism industry. Most of the lectures were handled by well-known veterinarian and owner of a game capture unit, Dr Ulf Tubbesing and his assistant Mariska Bijsterbosch. Professional photographer Dirk Heinrich handled part of the theory and the practical sessions of crime scene photography. Members of the K9 unit demonstrated how their dogs can be used to track down poachers and other criminals while a representative of Bushwackers explained the use of metal detectors, and had course participants experience that to be able to find metal parts at a crime scene needs practice. 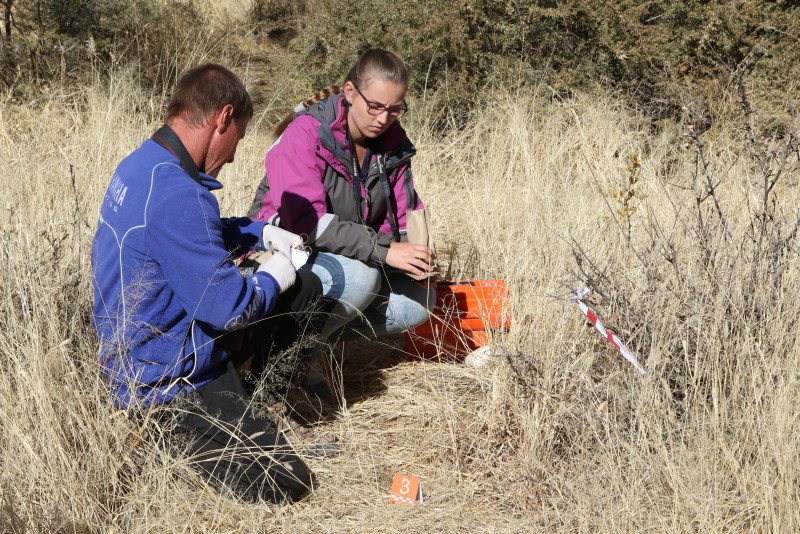 (The course participants had the chance to demonstrate what they had learned in the days before about securing a crime scene and securing and collecting evidence which is vital for the police to be able to present a complete case in court. Photo: ISAP / Dirk Heinrich)

Dr Tubbesing gave some background on poaching and pointed out that not only the poaching of rhino and elephant is a serious crime by law but also the poaching of pangolins, birds and antelope. Every poaching scene is a crime scene since it involves animals that were killed illegally. Moreover, the poachers trespassed either on state or private property, often used illegal ways of killing animals, and frequently handled non-licensed weapons and ammunition, stolen rifles and bullets or weapons without the owner’s permission. When poaching antelope like oryx or kudu, poachers sometimes use dogs to corner the animals and then kill them with spears, which is against the law. Poaching warthog and transporting the meat from one district to another is a serious offence in terms of veterinary laws. Farmers and owners of game and domestic stock should use all possible means to increase the charges against such criminals to make sure they receive the maximum punishment.

To achieve this it is important to find, secure and gather as much evidence as possible. “It is important to understand that crime investigation is very complex and not what you see in movies”, Dr Tubbesing pointed out. As security measures become more effective, the skills and experience of criminals improve. Crime is often fuelled by opportunity and to get the culprits behind bars, it is important to secure the evidence and to have enough evidence backup safely in case evidence gets lost or a corrupt or incompetent official handles the case.

To fight crime and to solve cases, the use of DNA samples of victims and culprits is becoming increasingly important. Dr Tubbesing explained what DNA is, how to preserve this crucial part of evidence, how and where DNA can be found and how it should be collected and preserved. To have a database with DNA of criminals is as important as having a database of rhinos and other vulnerable animals in different countries to be able to trace criminals internationally or to link evidence to a specific country and area. 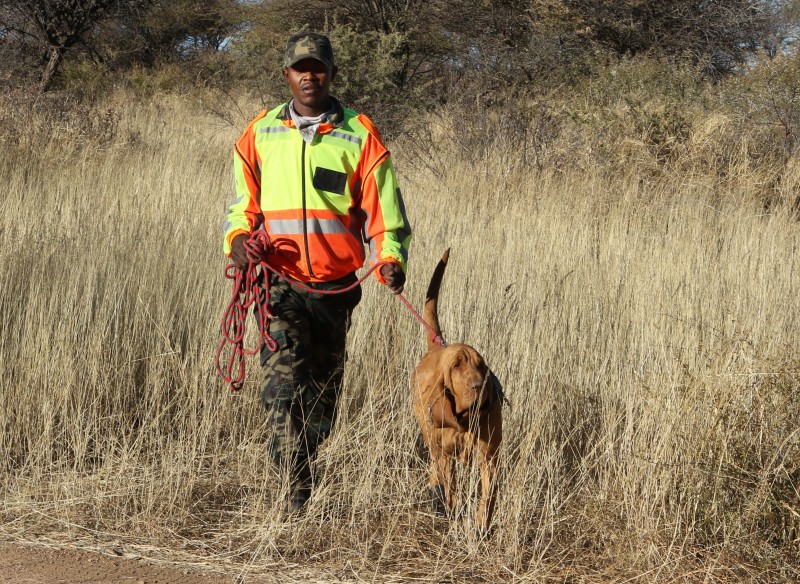 (How effective the members of the K9 unit are able to use their trained dogs to follow a spoor or to find vital evidence was demonstrated when one person walked through the high grass and hiding under a bush but was detected by the dog in no time. Photo: ISAP / Dirk Heinrich)

A staged poaching case gave the course participants the opportunity to practice what they had learned during the previous days. The importance of using drones to investigate a poaching scene from a bird’s eye view before moving in became clear. Taking photos with the drone proved to be very valuable for giving an overall and detailed impression of the crime scene from directly above. A drone could also be used to scan the immediate area around the scene for possible poachers or more evidence or clues.

All participants said the course was an eye-opener to understand the complexity of an investigation and the work the police is doing. They also realised how important it is to be a partner of the police to achieve the same goal, namely to get criminals behind bars.

The course was only made possible through the generous support and donation by a Swiss donor and local supporters and the donors who made it possible to build the ISAP camp. For ISAP to support anti-poaching efforts by various organisations a number of local donors have been very generous.

It is planned to have more courses in future for interested individuals or for farmer associations, conservancies or NGO´s. Inquire per our contact page for details on future programs.. 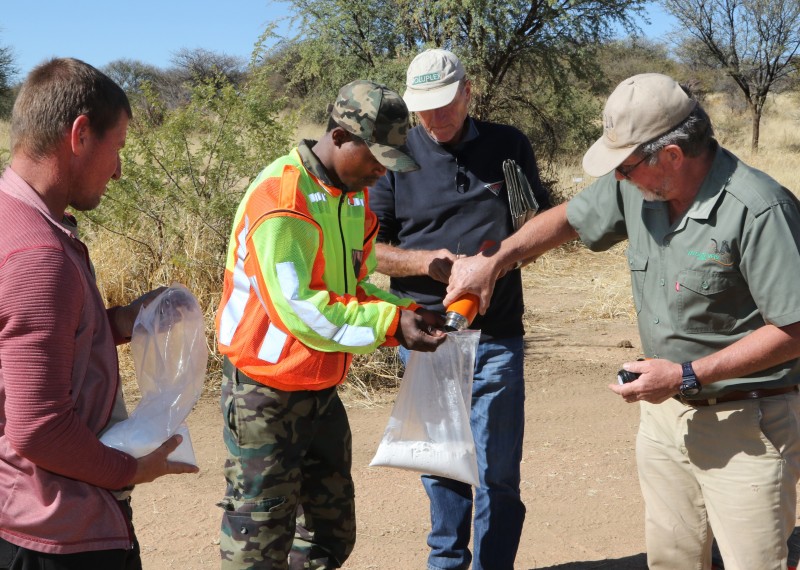 (Dr Ulf Tubbesing helped to prepare dental stone to make a cast of a spoor and track. One has to work fast before the material starts to harden. Once the frame is filled patience is needed for the cast to dry and harden properly before being picked up. Photo: ISAP / Dirk Heinrich)